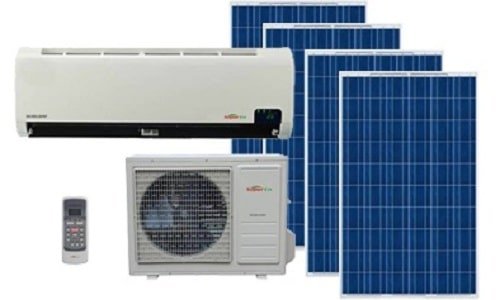 A solar air conditioning system is simply a system of cooling and heating that utilises solar power, rather than electricity from the mains. While they can have a significant upfront installation cost, solar air conditioners are much cheaper to own and operate in the long term, as they utilise virtually unlimited energy provided by our sun.

Solar energy is a great way to decrease both your electricity bill and your carbon footprint, so what are some different ways to incorporate it into your home?

Conventional solar powered cooling systems: which comprise the majority of installed systems.
‘Open loop’ cooling systems (known as desiccant cooling): this type of cooling is newer and less common, but can be more cost and energy efficient.

Conventional solar air conditioners utilise a standard vapour compression refrigeration cycle to cool or heat the building in question. The essential principle is that heat in the building is transferred to a refrigerant gas, which is then circulated out to a condenser where the excess heat is dumped. The now cool refrigerant then circulates back into the building to repeat the cycle. A conventional solar AC system draws operational power from a solar array rather than the electricity grid, in an effort to increase efficiency and lower costs.
Open Loop Cooling System

When cooling is required, the water is used to heat up air, which is in turn used to dry out a cylinder that extracts the excess moisture from air flowing into a parallel chamber. This dried air is then pumped through a cooler and is then circulated around the house. The hot air used for drying is then exhausted outside the building in this cooling process.

When heating is required, the hot air is instead used to directly warm the house.